I Like My Vampires Badass, Sexy, and Un-Sparkly, Thank You Very Much

Happy Halloween! In honor of the day, I’m going to quick shout-out to my favorite vampires. And no offense to Twilight fans, but I’m sorry, the Cullens just don’t have the badass, sexy, multi-dimensional-characters thing down. But that’s an argument for another day (and while I have mixed feelings about the whole Twilight thing, especially Edward, I quite adore the Cullen family).

So, without further a-do, and in no particular order, Lucy’s favorite vampires! 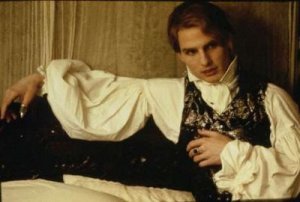 These books were really my first taste (no pun intended…oh wait) of modern vampire lore. I was never much of a horror kid, so I avoided these creepy guys until around high school, when I said screw all that, and dived into these books enthusiastically. I started with the second book, The Vampire Lestat, which I still think is a much stronger book that Interview with the Vampire, even if it doesn’t get as much lipservice.

Anyway, you can’t get much better than Lestat. He knows he’s a monster, and he’s not afraid or ashamed. That doesn’t mean he’s not conscious of his actions, or introspective, but he just does what’s “in his nature.”

Angel, from Buffy the Vampire Slayer and Angel 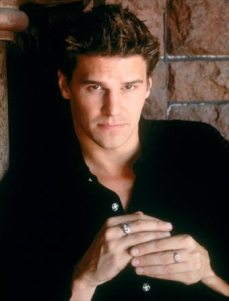 The original angsty psydo-stalker. Angel had it all: a dark past, a go-evil-trigger, and an angst-inducing human soul. I wasn’t sold on him in the first few seasons of Buffy, but by midway through his own show, Angel is an entertaining, endearing, and complex character.

The most fascinating thing about Angel is really his split personality (Angel v. Angelus), which is really just so much metaphor for his personal id-v-ego-v-superego thing. Thank you, Freud! Seriously though, he makes for some interesting character analysis. And, though not my type, he is pretty easy on the eyes. He’d make a really awesome big brother. 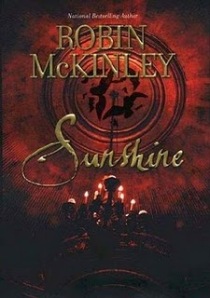 Sunshine, by Robin McKinley, is hands down my favorite vampire book (yes, even ahead of Lestat), for two main reasons: 1) it’s an interesting and fascinating world, and 2) the main character, a girl, kicks freaking ass. Actually, my original disappointments with Twilight stemmed from having read this first, and thus taking feminist and literary expectations with me.

Sadly, Constantine doesn’t get a beef-cake shot, because he hasn’t appeared on the silver screen (yet?).  Equally sadly, I can’t give him a very good summary, because you don’t learn that much about him (and it’s been about 4 years since I read the book). He’s quiet, mysterious, and very powerful, but he has a sad quality to him. One of my favorite vamps, and definitely one of my favorite books.

Spike, from Buffy the Vampire Slayer and Angel

Yes, more Buffy vampires, but I just can’t help myself. First off, have you seen him? Drool! ‘nough said.

Except, well, no, I’m never been the type that just falls for a character because they’re drool-inducing. Honestly, yes, James Marsters is plenty good looking, but what really makes me love Spike is the level of development his character gets. Buffy has a number of really well-developed characters, but Spike is one of the most fascinating.

Unlike Angel, who abandons his evil ways and completely embraces his life as a hero, Spike never really loses his edge. He’s always walking that line between good and evil, and, as in everything, those characters are so often the most fun.

Anyway, I hope you all have a wonderful Halloween! Be good, eat far too much candy, and keep a look out for your own favorite “baddies.” On that note, I’m sure I ommited a lot of great vampires (and vampire-like characters), mainly because I honestly don’t read that much horror or paranormal romance. So, feel free to drop me a comment with your favorites!

Lucy lives in Portland, OR, and likes to write about books, anime, and relatable teens living their lives (magical or otherwise). She's a co-host on the CLAMPCAST IN WONDERLAND and WRITE FOR ME, WRITE FOR YOU podcasts.
View all posts by Lucy →
This entry was posted in Books, Movies / TV, Other. Bookmark the permalink.