Kyra looked down at the little creature. It had perked up at the sound of their voices and lifted its head to look at them in what Kyra could only describe as a hopeful way. It wasn’t that she’d never heard of Katzenheim pigs, but more as the punch line to a joke than as an actual practical means to finding someone. The idea of trusting her mission to a pig seemed borderline insane.

This month I’m proud to be one of over a hundred bloggers who are part of the blog tour for Bridget Zinn’s YA fantasy, Poison. Sadly, Bridget died before she could see her book debut, so her friends, family, and community have come together to celebrate for her.

My official stop is Sunday, March 24th, but in the week leading up to it I’m going to be chronicling the adventures of my own “seeking pig,” inspired by Poison‘s adorable Rosie. I’ve made a Instagram account (TheSeekingPig) just special for the event, but I’ll also be tweeting the pictures. Stay tuned, as there may also be a giveaway later in the week…

Sixteen-year-old Kyra, a highly-skilled potions master, is the only one who knows her  kingdom is on the verge of  destruction—which means she’s the only one who can save it. Faced with no other choice, Kyra decides to do what she does best: poison the kingdom’s future ruler, who also happens to be her former best friend. But, for the first time ever, her poisoned dart…misses.

Now a fugitive instead of a hero, Kyra is caught in a game of hide-and-seek with the king’s army and her potioner ex-boyfriend, Hal. At least she’s not alone. She’s armed
with her vital potions, a too-cute pig, and Fred, the charming adventurer she can’t stop thinking about. Kyra is determined to get herself a second chance (at murder), but will she be able to find and defeat the princess before Hal and the army find her? 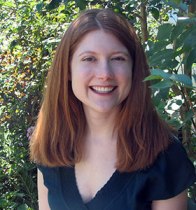 Bridget grew up in Wisconsin. She went to the county fair where she met the love of her life, Barrett Dowell. They got married right before she went in for exploratory
surgery which revealed she had colon cancer. They christened that summer the “summer of love” and the two celebrated with several more weddings. Bridget continued to read and write until the day she died. Her last tweet was “Sunshine and a brand new book. Perfect.”

Bridget wanted to make people laugh and hoped readers would enjoy spending time with the characters she created. As a librarian/writer she loved books with strong young women with aspirations. She also felt teens needed more humorous reads. She really wanted to write a book with pockets of warmth and happiness and hoped that her readers’ copies would show the watermarks of many bath time reads.

Add Poison to your Goodreads pile!

Lucy lives in Portland, OR, and likes to write about books, anime, and relatable teens living their lives (magical or otherwise). She's a co-host on the CLAMPCAST IN WONDERLAND and WRITE PLACE/WRITE TIME podcasts.
View all posts by Lucy →
This entry was posted in Blog Tour and tagged bridget zinn, follow that pig, poison, the seeking pig, young adult fantasy. Bookmark the permalink.