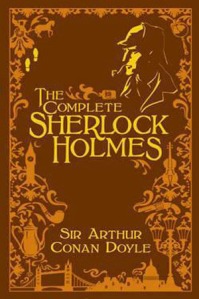 I’ve been kind of lacking on book posts recently, mainly because I haven’t been reading books, plural, so much as book. More specifically, The Complete Sherlock Holmes, which is a weighty tome if every there was one (thank god for my Nook). Back in December I caught the Sherlock Holmes Exhibit at OMSI (which was awesome, and if you get a chance to catch it while it’s touring, DO IT!). It inspired me to delve into the original works, since I’d only ever read snippets here and there, and I was hooked.

I’ve started to read a few other books since then, but I keep going back to Sherlock Holmes. I think I’m in it for the long haul. I haven’t read this much classic literature since college, and it feels pretty awesome. It’s always nice to remember that the classics are classics for a reason.

What I find really fascinating, is how much of Sherlock I see echoed in current popular culture. So much of the Mystery genre traces back to him, of course, but I see the echoes in Law and Order, House, and other procedural shows. The attention to detail, the laying of clues for even the audience to find, the nature of the logic puzzles, even our idea of genius; these were all influenced by Arthur Conan Doyle’s iconic hero.

I may be a little biased because I already like writing from this era, but I think Sherlock Holmes is still really readable. If you’re ever been intrigued by modern adaptations of Sherlock Holmes, you should definitely check out the source!

Lucy lives in Portland, OR, and likes to write about books, anime, and relatable teens living their lives (magical or otherwise). She's a co-host on the CLAMPCAST IN WONDERLAND and WRITE PLACE/WRITE TIME podcasts.
View all posts by Lucy →
This entry was posted in Books, Ranting and Raving, Thoughts on Media and tagged classic literature, great detectives, mystery novels, sherlock holmes. Bookmark the permalink.