Now the fun really begins! This is part of the Great Ouran Analysis. If you missed it, check out my introductory post first. And beware, there will be spoilers ahead. This post will also be a tad long, so settle in.

Episode 1: Starting Today, You Are a Host

Ideally, you’ll have seen the first episode of Ouran High School Host Club by now, because while I’ll try try not to give too much away all at once, there will definitely be spoilers for the first episode.

Being the first episode, this is where we get our first taste for this strange show, and we’re introduced to it along with our reluctant heroine, Haruhi Fujioka. She stumbles into the Host Club on accident, and soon finds herself roped into working for the club to pay off the price of a vase she accidentally breaks. Haruhi is dressed in sloppy jeans and a sweater, with messy short hair and exaggerated glasses, and most of the characters (and the audience) at first assume she’s a boy. A first Haruhi is simply tasked with manual labor and chores, but when they discover she’s actually attractive behind her glasses, Haruhi is dolled up to be a “rookie host,” and made a full member of the club.

Unlike the rest of the students at the prestigious Ouran Academy, Haruhi comes from a modest, lower-middle class background, and finds the host club and its students as alien and occasionally offensive as we do, at least at first. We’re meant to be intrigued by the characters in this episode, but we’re not meant to necessarily like them yet.

If you’ve not watched much anime, this is going to seem like a pretty strange premise to you, but it’s actually a bit of a cliche in shoujo stories. The term “shoujo” means “girl,” and is used to refer to media—usually anime and manga—aimed at teen and tween girls. These shows typically have ridiculous scenarios, and are often based in something like reality, focusing on school drama and first love. It’s not unusual to find a series with a heroine who’s crossdressing in order to be close to her crush. Ouran reminds me most of a series called Hana Kimi, which follows a Japanese-American girl who moves to Japan to attend an all-boys school in order to meet the famous track star she has a crush on. These stories usually have multiple male love-interests in a “reverse-harem” formula (a “harem” anime, in comparison, features a male main character with lots of female love-interests…it in no way indicates any actual sexy-times, although sometimes that does come up, depending on the age range for the series), and there’s generally a lot of drama surrounding the main character’s true gender—and a lot of energy spent trying to keep it a secret.

Ouran is a satire of these tropes, going bigger and better as a send-up (and commentary) on the genre. The boys surrounding Haruhi are different types, naturally, but they are fully aware of it. It’s literally their selling point as a club. You can pick whatever type of guy you prefer, and spend an afternoon drinking tea with them. It’s important to note that host clubs—and they’re more-prevalent all-girl equivalent, maid cafes—are a real thing in Japan. Though granted, probably not in high schools.

With each character a clear and self-aware type, the real challenge of the show becomes taking these walking archetypes, and developing them into real characters.

So without further ado, lets meet our cast. 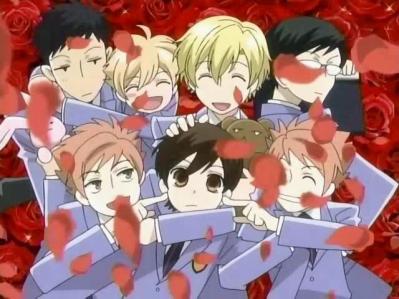 First, there’s our heroine, Haruhi. Unlike your typical shoujo heroine, Haruhi isn’t much interested in typical “girly” things, but she’s also not aggressively tomboyish. She’s very focused on her studies, and unlike most of the other students, isn’t looking for an escape from reality. Although the hosts may be set up as her potential love-interests, Haruhi herself doesn’t express much interest in romantic relationships at all–certainly not with the frivolous boys in front of her. Haruhi is our “straight man,” our grounding force in this ridiculous show; a perfect lense for the viewer, and a pretty unique heroine.

Of the hosts, you have Tamaki, the chivalrous, charming leader of the club, and Haruhi’s primary love interest. At first, you might find Tamaki a little annoying (Haruhi certainly does). He’s basically the epitome of a spoiled rich boy; oblivious to his privilege, naive about the experiences of anyone outside his bubble, and self-centered in the extreme. But he’s also got a “heart of gold,” and like all the characters in this series, he’s got a lot of development to get through.

Next we have Kyouya, the power behind the thrown. Kyouya is a “glasses” type, which you often see in anime as evil scientists (often with a kind of chaotic-neutral bent, neither completely evil nor completely good). Outwardly mellow and studious, these characters usually have a dark side, and Kyouya’s comes in the form of extreme drive and power. He is the assistant director of the club, and is responsible for all the logistical aspects of it’s structure, while Tamaki flings around vision and desire. Of all the characters, Kyouya is the most in control of any given situation.

You’ve also got the twins, Hikaru and Kaoru. Although they’re also tricksters, they’re mostly fulfilling the “forbidden love” angle, and if you haven’t watched much anime, you’re probably going to find them a little off-putting at first. I’ll be honest, I almost stopped watching Ouran because of the twins (they just reeked of queer-baiting), but they ended up being among my favorite characters by the end (Kaoru is my favorite). Bear with them. Remember, since Ouran is a reverse-harem anime, and all the male characters are ostensibly potential love-interests for Haruhi, we’re not meant to really think the twins are sleeping together.

For the purposes of the first episode (and most of the early episodes), the twins act as a unit; but don’t worry, they’ll get individual development as the series progresses.

Lastly we have Honey and Mori, who largely act as a pair. Mori is the strong-and-silent type, while Honey is every toothache you ever got from eating too much sugar. They’re the upperclassmen of the group (despite how young Honey looks), and mostly have their shit figured out before we even meet them, so while we still have a lot to learn about them, they don’t have a lot of changing to go through in the series. They provide a nice constant for the show to fall back on, as well as some comic relief (not that’s it’s ever really in danger of lacking that).

Ok, now that you know who all these characters are, lets talk about the episode, shall we?

One of my favorite things about Ouran is that it relies a lot on symbolism. Each episode will have it’s own main symbol, as well a few smaller symbols rolled over from previous episodes (or just thrown in for flavoring). The main symbol pops up throughout the episode, usually in cut-away shots that are only a few seconds long, and serves as a metaphor for whatever the main internal plot of the episode is. Blink, and you might miss them.

In this first episode, we get a set of six lightbulbs. For most of the episode, we’re meant to think Haruhi is a boy, along with most of the characters. Whenever someone figures out her true gender, we see one of the lightbulbs light up. Of course, by the end, all the lightbulbs are lit, and we’re let in on the secret as well.

The order of the light bulbs is pretty telling. The first is Kyouyo, who knows as soon as he consults her file (right upon meeting her), but never sees fit to share this information. As I’ve mentioned, Kyouya pretty much always knows everything all the time.

Next, Honey and Mori figure it out, more or less accidentally. Mori grabs her to save her from Tamaki’s insanity (and, I guess, accidentally feels her up?), and Honey just sort of realizes it because she likes cute things, I guess. Although, he likes cute things, so…I don’t know. Point being, they both figure it out pretty quickly. Throughout the show, they will continue to observe things the others miss, because they’ve got less of their own baggage to distract them.

The suspense of the episode mostly comes down to the twins and Tamaki, who are really the least self-aware of the group. The twins catch on about 2/3rds of the way through the episode, but it takes Tamaki the entire episode to realize what’s going on. This pattern will play out when we get into the nitty gritty character development stuff in the second half of the series, so stay tuned!

This episode also introduces some other little visual clues that will pop up again throughout the show. In the first scene of Haruhi in the host club meeting room, there’s an arrow that keeps pointing to a vase on a pedestal. It does this through the first few conversations Haruhi has (through most the explanation of the club, really). And of course, the scene ends with Haruhi bumping into the pedestal and breaking the vase, which leads her into Host Club servitude, establishing the entire premise of the show.

There are also roses. A lot of roses. Now, it’s pretty typical of shoujo shows to utilize flowers as a way of conveying emotions. A girl looks at a handsome boy, and we see him with a sparkly flower border to symbolize her adoration of him. But Ouran takes it a step further. The roses usually symbolize the emotions of the character they’re surrounding, not the camera’s perspective, and they generally go hand-in-hand with an exaggeration or fantasy of some kind. Tamaki gets a lot of rose scenes because he’s by far the most prone to exaggeration and fantasy. Again, this is not entirely unique to this series, but it will come up more later.

By the end of the episode, we learn Haruhi’s secret (that she’s a girl), and it’s established that she will be staying with the Host Club, and has no real interest in switching to a girl identity just because her club members have figured her out.

Further more, in addition to establishing all the key players, this episode introduces the driving question of the show: what is the purpose of the Host Club? Sure, Tamaki explains straight-out that it’s a form of entertainment, a way to spend your free time when you’re rich and have an abundance of it. But, Haruhi is unconvinced, and perhaps so are we. Don’t worry, though, we’ve got 25 more episodes to answer that question!

Join me next Sunday for Episode 2: The Job of a High School Host! I’ll try to make it a shorter post, since we won’t have to go through much set up, but I make no promises…

If you want to get fancy, Lucy lives in Portland, OR, and has a MA in Writing/Book Publishing, with a focus on Young Adult Literature, and a heaping disregard for literary snobbishness (she was an English Major–she’s seen and spouted her fair share). She works as a social media marketer, and has dabbled in developmental editing as a freelancer.
View all posts by Lucy →
This entry was posted in Anime, The Great Ouran Analysis and tagged analysis, Anime, critical analysis of anime, literary analysis, ouran high school host club, popular culture studies. Bookmark the permalink.

2 Responses to 1: The Door Opens