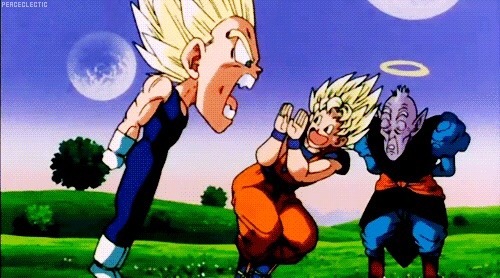 Maybe later I’ll write up some detailed critique on my blog, but right now I just want to be Mad.

So, Dragon Ball has a long, torrid history of not being great to its female characters. I (like probably many fans) tend to excuse that as it being from a different era. After all, the 80s and 90s were a long time ago. Surely the writers now would treat women better, right?

This was a long time coming, and I’m not actually surprised, just deeply disappointed. I would like a thing I love to be better to me.

Quick recap: Goku is gathering fighters, including Tien and Roshi. They’re hanging out at Tien’s dojo, so Goku goes there, and stumbles into a dumb plot wherein a girl Tien used to know shows up to challenge him, gets systematically creeped on by Roshi, and no one does anything.

Of fucking course no one does anything. Because this show, full of strong characters we’re supposed to look up to, can never bother to actually defend women and stop perverted assholes from assaulting them.

To be clear: I’m not mad that the perverted assholes exist, necessarily. They’re a cliche of shonen stories, which are known for raunchy humor, and just, whatever. But our heroes are supposed to be better than that.

Sure, Goku’s an oblivious moron and I don’t expect him to suddenly become this defender of women, but there are so many ways to have him shut this bullshit down, while staying in character and maintaining the tone. It doesn’t have to be a Lesson. It can still be goofy, raunchy Dragon Ball, but just maybe don’t have your main character fucking back out of the room where a perverted old man is alone with a clearly-protesting woman.

It’s not like the show is trying to tell us what Roshi’s doing is right, but it’s also not telling us that it’s behavior we should take any steps to stop, either. It’s played off as harmless perversion; dirty old men will be dirty old men, after all. But is it harmless?

Actions speak louder than words, and from the beginning this series has shown through its actions that women and girls should expect men to ogle and assault them, and the good guys in their lives won’t do anything to stop it.

It’s in character. It’s not unexpected and I shouldn’t be surprised…but it’s fucking disappointing every damn time.

Lucy lives in Portland, OR, and likes to write about books, anime, and relatable teens living their lives (magical or otherwise). She's a co-host on the CLAMPCAST IN WONDERLAND and WRITE PLACE/WRITE TIME podcasts.
View all posts by Lucy →
This entry was posted in Anime and tagged Anime, dbz, dragon ball, dragon ball super, ranting. Bookmark the permalink.