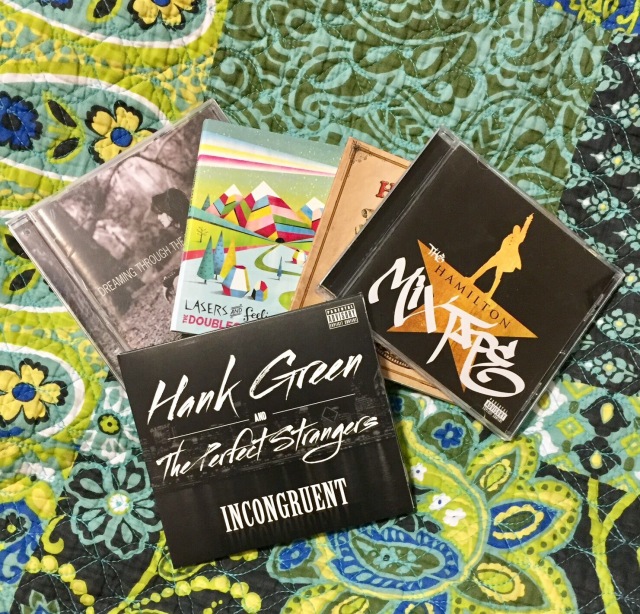 This week, I’ve been thinking a lot about…CDs. Not albums, not music, but CDs. Physical CDs.

Or more specifically: how few of them I have these days.

CDs used to be a necessity. Like tapes and records before them, they were required in order to, you know, listen to music. But these days, I almost never buy CDs. I mean, what’s the point, really? It’ll only be useful for the five minutes it takes to download the music onto my computer, and from then on, the CD is useless. I don’t even have a CD player anymore, other than my computer. If I’m listening to music, it’s on my iPod, or through Pandora (or even Youtube). If I really need to own it and have it on hand, I download it from iTunes.

And that makes me think: the CDs I have are kind of extra special, aren’t they?

So, I wanted to do a quick survey of the CDs I do still own, discounting any that aren’t actually in my room.

Mostly, I have stuff that is super indie. Hank Green and the Perfect Strangers. The Doubleclicks. Some indie singles I’ve picked up at cons.

Then, there are my Vienna Teng CDs, which date back from college, but are beloved enough that I’ve kept them around.

And finally, I have some musical soundtracks, because I can usually pick them up for cheap at used stores; cheaper than if I downloaded them.

And finally, Hamilton, because…well, because Hamilton.

I guess my conclusion is that I buy/keep CDs when I really care about a band or show, or if it’s the cheaper option.

But I’m left with a dilemma. The Steven Universe soundtrack finally came out this month, and I instantly bought it in iTunes. But I kind of want the physical CD, too….

Lucy lives in Portland, OR, and likes to write about books, anime, and relatable teens living their lives (magical or otherwise). She's a co-host on the CLAMPCAST IN WONDERLAND and WRITE FOR ME, WRITE FOR YOU podcasts.
View all posts by Lucy →
This entry was posted in Weekly Rambling and tagged are CDs retro yet?, cds, feeling old, musical, times change. Bookmark the permalink.