Queer Characters in YA Dystopians

I like to joke about queering straight characters through fanfiction, headcanons, and the like, but I do seriously believe that a fictional world that doesn’t include LGBTQIA+ characters is a poorly constructed world.

This particularly drives me crazy with YA Dystopian Science Fiction, and is one of the reasons I’ve stopped reading it over the last few years. I can accept a story that follows a character who’s a member of the privileged middle class; a story that’s about someone living comfortably in a society, and then slowly realizing how corrupt and horrible it really is. And I can accept that a straight character is a good vehicle for this story, especially if the government has any control over reproduction and marriage. The fall down is longer when you fall from the most privileged place. However, for that character to never even meet someone gay as she realizes how corrupt her government is, to never even learn about this massive part of her society which has been completely erased, or to never even encounter hints of the suppression of queer individuals (even hints she misses) just rings false to me.

The same can be said for diversity in general. You tend to see essentially the same white girl in a lot of Dystopian literature, and while she usually has slightly different motivations and background in each iteration, it starts to feel like reading the same story over and over again.

A great example of a Dystpian Sci Fi that did work for me is Delirium, by Lauren Oliver. Her main character starts out content in her society; a society which has deemed love a disease, and enacted a lobotomizing “cure” to rid humanity of it. In the first book there are no actively gay characters, but there is an aside to the fact that such people used to exist, and were also impacted by the government’s efforts to stamp out the Delirium. In the context of the story, where people marry for reproduction and adults can get carted away for showing signs of any form of love, it not only makes sense that LGBTQIA+ characters would be few and far between, but it actually adds to the weirdness of the world. In the later books, we even get to meet real, live queer people.

My main beef with the lack of queer characters in YA Science Fiction is this: it shows a clear and puzzling naivety of our current world. We are in the midst of a revolution. Like the Civil Rights Movement and the Women’s Rights Movement, both of which still rage in our culture to this day, LGBTQIA+ people across America (and beyond, obviously) are fighting for equal rights and equal representation. Already, gay, lesbian, and trans people are appearing in pop culture in increasingly less-stereotypical roles. Same-sex marriage has been legalized, and in many places in America no one bats an eye when they see two guys holding hands on the bus. Queer people can and do actively and openly hold positions of power, both in entertainment and in more “substantial” areas like government and business. This is real, and this is happening, and it’s clear that the changes beginning now will drastically affect the way our world looks in the future. Even if we fall into the pits of a dystopian future, that won’t change the reality of now; and failing to acknowledge the echos of that is, frankly, pretty similar to the re-programming done by a controlling futuristic dictatorship. You know, the bad guys.

I’m not saying all Dystopians have to address this, because I can buy that in some, the corrupt controlling government has probably stamped out open sexual and gender minorities along with all the other people who don’t fit into their version of utopia, and altered the record of history so vastly that barely any hints have survived. Every story is different. But what I don’t buy is that virtually no YA Dystopians deal with this. It’s especially ridiculous when you think that these books are aimed at teenagers. These issues are especially relevant to teenagers, who are just starting to explore their own sexuality. Even the straightest teens will have friends and classmates who aren’t, and it’s important that this reality is acknowledged in their fiction as well. It also misses out on a very interesting lens by which to view the corrupt world; as someone who isn’t even supposed to exist.

Or, a revolutionary idea: how about a world where queerness is seamlessly a part of society; an invisible, unremarkable part of who some people are. And then there’s a completely unrelated dystopian hellscape, without queerness being dragged in for added angst and drama. Wouldn’t that be something?

I think this also speaks to a larger problem in literature, especially YA literature. In the last ten years there has definitely been an influx of books that do have queer characters, but often these are “issue” books; books generally of a contemporary-fiction bent, which focus on the problems of being different. These books are great, of course, and necessary. They let people recognize the problems they’re facing, or help them understand the problems of others. But it can’t end there. If the only queer characters we ever see are in books specifically about being queer, it feels like a finite existence, not a universal one. And that’s simply inaccurate.

I’ve been a little spoiled by shows like Steven Universe and Welcome to Night Vale, where characters are unabashedly queer, but their queerness doesn’t impact the plot other than just being part of who they are. I really don’t have time for books that are about different versions of essentially the same straight cis white girl. She’s fine, but I’ve read her story before; give me something more!

It’s been a few years since I wrote the first version of this post, so when I found it sitting in my drafts, I reached out to my friend Mel, who works for a bookstore in Seattle, and is much more attuned to the current YA world than me. I was hoping that in the five years since I first drafted this post, something had changed. Sadly, it seems like not much has.

I was able to come up with a small list of recommended reading, but it doesn’t look like any of the big-hitting franchises have changed their tone much. The style of YA that I fell in love with around 2010 has always had the potential to tackle these topics in ways other forms of literature can’t, and I’m sad that it seems the big publishers are still shying away from giving Hunger Games– and Divergent-level marketing to stories with prominent (or any) queer characters.

Also, I’m not sure what significance it has, but the ones I could find seemed to be mostly about boys, even though the main trend of YA Dystopian in a post-Hunger Games world has been for female protagonists.

But, here’s a reading list you (and I) can dig in to the next time the itch for Dystopian YA hits: 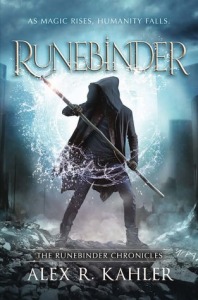 Runebinder, by Alex R. Kayler
(though I think this is more Fantasy than Sci Fi)

The Culling, by Steven Dos Santos

And for further reading, here are some super helpful lists of queer YA books:

Most Anticipated Queer YA Books of 2018: Hypable’s Top Picks

Please, if you know some good YA Dystopians that actually feature LGBTQIA+ people (especially as more than just background), let me know!

Lucy lives in Portland, OR, and likes to write about books, anime, and relatable teens living their lives (magical or otherwise). She's a co-host on the CLAMPCAST IN WONDERLAND and WRITE PLACE/WRITE TIME podcasts.
View all posts by Lucy →
This entry was posted in Books, Thoughts on Media and tagged diversity, dystopian, lgbt, lgbtqia, queer, representation, sci fi, science fiction, ya, young adult. Bookmark the permalink.