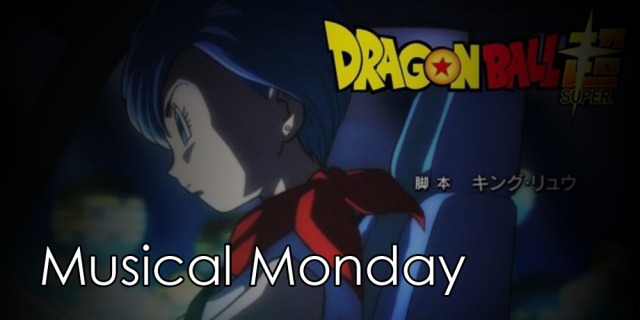 Happy Musical Monday! On Wednesday…eh, it’s not the first time, and it won’t be the last.

Dragon Ball Super ended about a month ago (you may remember I had feelings about this), and I’m definitely missing my weekly shot of DBS. So today I wanted to look at my favorite ending theme from the series.

“Boogie Back” by Miyu Innoue

While opinions about the series as a whole vary, I personally think that one thing consistently awesome about Super was its ending themes. It was interesting to adjust to the modern trend in anime where ending themes (and often opening themes) change every 13 to 26 episodes, instead of lasting 100+ episodes like in earlier decades. In the whole three-year run of Super, we got a total of 11 endings, and I enjoyed everyone one of them. But the eighth ending, “Boogie Back”, is by far my favorite.

Visually, all of the endings lean pretty hard on nostalgia, with an array of shots from beloved characters (even ones that barely feature in the actual show). “Boogie Back” is the one that reminds me most of the ending from the original Dragon Ball, probably because of the prominent shots of Bulma.

I also just freaking really love the song, even with only a tenuous grasp of the lyrics (it’s been a long time since college, ok?). It’s the only of the endings that I’ve actually sought out and purchased, because it’s the right type of pop song that really makes my brain happy. It just has this wistful feel to it (especially combined with the visuals) that I’m realizing really pulls me to songs.

[translated]
“(Boogie Back) Chasing after you,
The beating in my chest gets faster.
(Boogie Back) I fell in love in a moment.
Give me that dream once more…”

If you want to get fancy, Lucy lives in Portland, OR, and has a MA in Writing/Book Publishing, with a focus on Young Adult Literature, and a heaping disregard for literary snobbishness (she was an English Major–she’s seen and spouted her fair share). She works as a social media marketer, and has dabbled in developmental editing as a freelancer.
View all posts by Lucy →
This entry was posted in Anime, Musical Monday and tagged Anime, boogie back, dbz, dragon ball, dragon ball super, ending themes, miyu innoue. Bookmark the permalink.