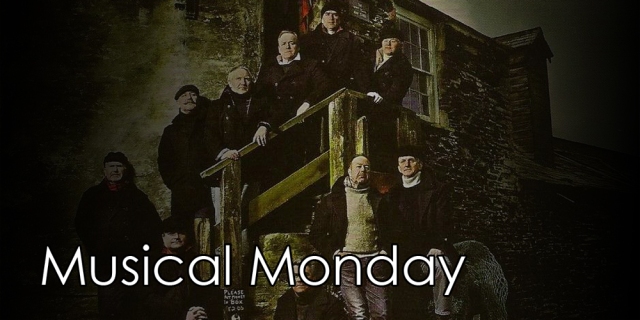 Ok, I’ll admit, it’s been a few…uh, weeks, since the last Musical Monday. If you’re new here (or it’s been so long you’ve forgotten), this is a weekly series I’m doing where I stare my discomfort with talking about music right in the eye, and see where it takes me. I don’t claim to know what I’m talking about, but I”ll try to keep it interesting!

Every summer, me and a couple thousand other people take to a small town in Oregon, and play pirate for a week. The event is called Sea Dog Nights. It’s kind of like a music festival, meets Burning Man, meets a Renaissance fair. Basically, a flat park is converted into a village of personal tents, merchant stalls, and yes, pirate ships, for a week of immersive fun. You’re expected to be in costume, and keep your campsite as period-appropriate as you can (some people have the kind of period tents you’ll see at an SCA event, and many of us make covers for our mundane tents or construct period-appropriate structures around shade popups or carports). It’s a little less structured than more reenactment-heavy events, though. Most people are in pirate or similar garb, but you’ll see the occasional fairy costume, cosplay, or steampunk outfit running around, too.

This was my fourth year attending the event, and while there are many aspects of it I love, one of my favorites is the music.

See, we have a tradition on our ship of gathering around a fire pit and singing songs. Most of them are sea shanties, but some of them are celtic or folk songs, and we’ve snuck in a few pop songs here and there.

No Hopers, Jokers, and Rogues is one of my absolute favorites.

This song to me says: summer. It says leaving my normal life behind for a week, hanging out with some of my closest friends, unplugging from technology while I drink a beer and gaze at a clear starry sky. It says new friends, new adventures, and a sense of community that often feels unattainable in normal city life. For a week, we become a village, and this song always takes me back there.

“Leave all your furrows in the fields where they lie,
The factories and offices, kiss them all goodbye
Have a little faith in the dream-maker in the sky
There’s glory in, believing in, and it’s all in the beholder’s eye…”

Lucy lives in Portland, OR, and likes to write about books, anime, and relatable teens living their lives (magical or otherwise). She's a co-host on the CLAMPCAST IN WONDERLAND and WRITE PLACE/WRITE TIME podcasts.
View all posts by Lucy →
This entry was posted in Musical Monday and tagged Musical Monday, pirate, pirate community, port isaac's fisherman's friends, sca, sea dog nights, sea shanties. Bookmark the permalink.