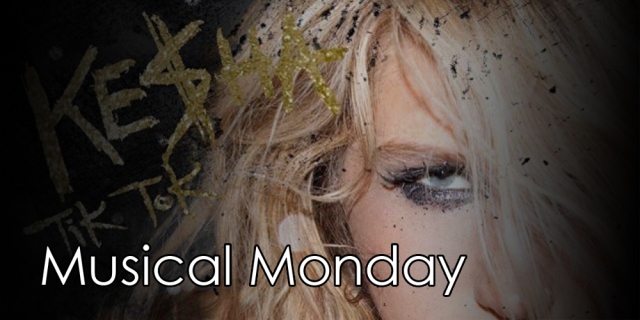 Ok, so it’s not Monday, but I missed the last two weeks…and I’m in a musical mood.

If you’re just joining us, you can read here why I, someone who doesn’t know much about music, is talking about it so much .

Portland’s been doing that early-spring thing where it alternates between sunny and chilly (often in the same day), and right now it’s super warm and sunny. This season always makes me crave dancy pop music, so here we go!

So, I kind of love Kesha. I mean, I especially like her new album, but that’s a topic for another week, because right now what I’m feeling is her old stuff. The stuff that’s all beat and auto-tune and ridiculousness.

I’m not what anyone would consider a partier (I actually first discovered this song via this bookish parody by YA author Jackson Pearce), but Kesha’s stuff is always great to dance to. And there’s just something about the rhythm and catchy repetition that makes my brain happy.

If there’s any type of music I’m most self-conscious about liking, it’s probably pop music. I’ve always been self-conscious about it. As I’ve said before, it never seemed like I liked the right stuff at the right time. When my friends were into pop, I was still listening to oldies. By the time I’d caught up to pop, everyone had gone alternative. By the time I was figuring out what that even meant, indie music was all the rage, and I basically gave up ever understanding what constituted “cool” music. “Pop” music doesn’t feel intellectual, and at some point, that seemed to matter.

But adulthood has made me care less and less, and well, here we are.

Pop music is catchy. That’s what makes it fun. It’s repetitive and, usually, pretty simplistic. Dance. Drive around. Drink. Fall in love. It may be playing in to surface-level emotions, but sometimes you just want to drive around with your windows rolled down, singing along to the radio, and absolutely not caring what anyone thinks. And when you do, I recommend Kesha.

“Don’t stop, make it pop
DJ, blow my speakers up
Tonight, I’ma fight
Till we see the sunlight
Tick tock on the clock
But the party don’t stop, no…”

Lucy lives in Portland, OR, and likes to write about books, anime, and relatable teens living their lives (magical or otherwise). She's a co-host on the CLAMPCAST IN WONDERLAND and WRITE FOR ME, WRITE FOR YOU podcasts.
View all posts by Lucy →
This entry was posted in Musical Monday and tagged Ke$ha, kesha, music, pop music, tik tok. Bookmark the permalink.